We are thrilled to announce that Sheila O’Donnell and John Tuomey of O’Donnell + Tuomey will receive the Outstanding Contribution to Architecture 2019 award at this year’s Building and Architect of the Year Awards in The Round Room at The Mansion House, Dublin, on Thursday, October 3rd.

Sheila O’Donnell and John Tuomey are partners in life as well as in architecture, having met while they were studying at UCD’s School of Architecture, and they have worked together as O’Donnell + Tuomey for more than 30 years. No other architectural practice in Ireland has won so many awards for its work, which is in itself a real measure of their pre-eminence in the profession.

The Dublin-based practice has designed cultural, social and educational buildings at home and abroad, as well as urban masterplans (notably the 1991 Temple Bar Architectural Framework Plan, as members of Group 91) and university campuses in Ireland, the UK and continental Europe — largely on the strength of a growing international reputation for engaging with complex urban sites and sensitive landscapes.

Major recent projects include the LSE Student Centre in London, a masterplan and new buildings for the Central European University in Budapest, the Timberyard social housing scheme in the Liberties, the Seán O’Casey Community Centre in East Wall, the Lyric Theatre on the west bank of the River Lagan in Belfast, the Photographers’ Gallery in Soho, London, and the Cavanagh Bridge over the River Lee for UCC.

Earlier work in Ireland includes a temporary pavilion at IMMA (in collaboration with painter Brian Maguire), the Irish Film Institute, Gallery of Photography and National Photographic Archive in Temple Bar, Ranelagh Multi-denominational School, GMIT’s Furniture College in Letterfrack, the Glucksman Gallery at UCC, the Centre for Research into Infectious Diseases at UCD, and a primary school at Cherry Orchard, in west Dublin.

Recently retired from UCD School of Architecture, where both of them had taught for more than 40 years, Sheila O’Donnell and John Tuomey — along with their highly-motivated staff — are currently working on a new museum for the V&A and a dance theatre and studios for Sadler’s Wells in London, an academic hub and library for the Technological University of Dublin and a new school of architecture for Liverpool University.

In 2015, they were awarded the RIBA’s Royal Gold Medal for Architecture and the American Academy of Arts and Letters annual Brunner Prize, both awarded in recognition of a lifetime’s work. This year, Sheila was named Architect of the Year at the 2019 Women in Architecture Awards and was elected a foreign honorary member of the American Academy of Arts and Letters. They are both members of Aosdána, the association of Irish artists.

Sheila O’Donnell and John Tuomey will receive the Outstanding Contribution to Architecture award at The Building and Architect of the Year Awards 2019.

The gala awards ceremony and dinner will take place on Thursday, October 3rd, at The Round Room at The Mansion House, Dublin. 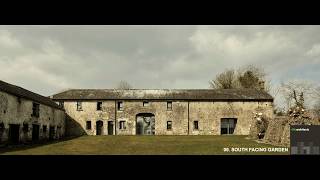